The history of the Celtic Cross Tarot spread suggests that this spread originated in Europe and is believed to be a modification of earlier spreads which were laid out in the form of a cross. 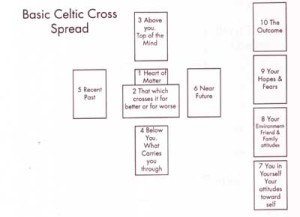 Possibly the first published reference to this spread was in 1910 in the book “The Pictorial Key to the Tarot” by Arthur Edward Waite, when he named the spread, “An Ancient Celtic Method of Divination,”  Waite also suggests that to his knowledge this spread has not been published in any other form before.

Waite makes a reference to the Celtic Cross and describes it as “a short process which has been used privately for many years past in England, Scotland, and Ireland.”

We know that members of the Hermetic Order of the Golden Dawn, of which Waite was a member, used the Celtic Cross spread. The Golden Dawn was magical, occult order based in Great Britain and active during the late 19th Century and the early part of the 20th Century.

Another theory on the history of the Celtic Cross Tarot Spread suggests that Florence Farr was the first person to use this spread. However, although she used the spread her method of reading the Celtic Cross was different to how Waite describes it’s meanings. Her method was apparently based on a numerological and elemental approach.

For help with any issues regarding, love, career, family and home please visit me at

Or I can be found at Bitwine

This site uses Akismet to reduce spam. Learn how your comment data is processed.